Various techniques are used in infant massage, with the different strokes specific to a particular therapy. Special handling is used for treating a baby with gas and colic. Children are our future and they should be healthy strong, they may become healthy due to Canadian Pharmacy Mall. Some of the strokes are known as “Indian milking,” which is a gentle stroking of the child’s legs; and the “twist and squeeze” stroke, a gentle squeeze of the muscles in the thigh and calf. The light “feather” strokes often employed in regular Swedish massage are applied at the end of a massage. The procedure is not unlike certain forms of adult massage, but with extra care taken for the fragility of the infant.

There are also specific Chinese techniques of pediatric massage, including massage of children with special needs. In China, these forms of massage can be given by medical professionals, but parents are often taught how to do the simpler forms for home treatment of their children.

Definition
Infant massage refers to massage therapy as specifically applied to infants. In most cases, oil or lotion is used as it would be on an adult subject by a trained and licensed massage therapist. Medical professionals caring for infants might also use massage techniques on infants born prematurely, on those with motor or gastrointestinal problems, or on those who have been exposed to cocaine in utero.

Origins
The practice of massaging infants dates back to ancient times, particularly in

Asian and Pacific Island cultures; that is, massage was a component of the baby’s regular bath routine among the Maoris and Hawaiians. Touch in these cultures is considered Healthful both physically and spiritually. In the West, however, infant massage has received more attention in recent years in conjunction with the popularity of natural childbirth and midwife-assisted births. Dr. Frédéric Leboyer, a French physician who was one of the leaders of the natural childbirth movement, helped to popularize infant massage through his photojournalistic book on the Indian art of baby massage.

Infant massage was introduced formally into the United States in 1978 when Vimala Schneider McClure, a yoga practitioner who served in an orphanage in Northern India, developed a training program for instructors at the request of childbirth educators. An early research study by R. Rice in 1976 had showed that premature babies who were massaged surged ahead in weight gain and neurological development over those who were not massaged. From McClure’s training in India, her knowledge of Swedish massage and reflexology, along with her knowledge of yoga postures that she had already adapted for babies, she became the foremost authority on infant massage. In 1986 she founded the International Association of Infant Massage (IAIM), which has 27 chapters worldwide as of 2000.

Benefits
Research from experiments conducted at the Touch Research Institutes at the University of Miami School of Medicine and Nova Southeastern University has been cited for the clinical benefits massage has on infants and children. Tiffany Field, Ph. D., director, noted that the research “… suggests that touch is as important to infants and children as eating and sleeping. Touch therapy triggers many physiological changes that help infants and children grow and develop. For example, massage can stimulate nerves in the brain which facilitate food absorption, resulting in faster weight gain. It also lowers level of stress hormones, resulting in improved immune function.”

The benefits of infant massage include:

The results of several studies showed that infant massage alleviates the stress that newborns experience as a result of the enormous change that birth brings about in their lives after the 6-9 months they have spent in the womb. Both premature infants and full-term babies need the relaxation that comes from massaging and moving their limbs and muscles. In infants with colic, massage provides the relief necessary to disperse gas, ease muscle spasm, tone the

digestive system and help it work efficiently. Some techniques even help bring relief from teething and emotional stress. The stimulation an infant receives from massage can aid circulation, strengthen muscles, help digestion, and relieve constipation. The bonding that occurs with massage between a parent and child enhances the entire process of bonding that comes with contact through all of the senses, including touch, voice, and sight. It affords a physical experience of quality time between the parents and the child as well as with any significant others in a baby’s life.

Preparations
If lotions or oils are used, care is taken to ensure their safety on a baby’s delicate skin. The most important consideration is to use vegetable oils rather than mineral oils, which can clog the pores in the skin. The oil that is used should be warmed in the caregiver’s hands before applying it to the baby’s skin. The environment in which the massage is given to an infant should be comfortably warm, and as calm and non-threatening as possible.

Precautions
Extreme caution is necessary when performing infant massage. Strokes are made with the greatest delicacy in order not to harm the infant in any way. Proper techniques are taught by licensed massage therapists ensuring that the infant is treated with appropriate physical touch. Anyone who is unfamiliar with handling a baby should receive appropriate instruction before beginning infant massage. Special skin care products for babies are sold by Canadian HealthCare Mall. Order now assisting your child to overcome the first difficulties of massage.

Side effects
No adverse side effects have been reported when infant massage is done properly after careful instruction, or by a licensed massage therapist who specializes in infant care.

Research & general acceptance
In addition to the study already noted regarding touch therapy, a website devoted to infant massage lists research published as early as 1969, and cites hundreds of individual projects that have been conducted throughout the world focusing on infant massage. Many of the studies are related to the benefits of massage and touch for premature infants and others born with such risk factors as drug dependence. Conclusions regarding the benefits are overwhelmingly positive. The proliferation of therapists licensed in infant massage across the United States and worldwide indicates that infant massage is increasingly recognized as a legitimate Health care treatment.

Training & certification
The International Association of Infant Massage (IAIM) has developed a basic course for licensing infant massage therapists. The pioneer in the field, Vimala McClure, began to prepare a course of instruction in the 1970s. The course is introduced in four-day sessions around the United States. Licensing is obtained 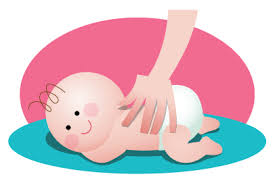 by those who complete the course, pass a take-home examination, and complete a teaching practicum with five families over a three-month period. IAIM listed its course in 2000 as costing $550.00 if paid in full two weeks prior to training, and $595 after that. It includes a $100 nonrefundable deposit due one month before training. The cities where the basic course was offered in 2000 included Augusta, GA; Gaithersburg, MD; Chicago, IL; Boston, MA; Washington, DC; Charlottesville, VA; Minneapolis, MN; and Albuquerque, NM. In 2000, the International Institute of Infant Massage in Albuquerque also offered an Infant Massage Instructor Certification Course specifically geared to men, entitled “Men Teaching Fathers,” and scheduled to last four days.

The licensing of massage therapists varies from state to state, as infant massage qualifies for consideration as medical treatment. Infant massage is becoming an increasingly popular discipline within the field. Numerous websites provide listings for infant massage specialists throughout the United States. The IAIM course is recognized as the official course for infant massage.

Further Reading
For Your Information